In 1871, nine men began organizing what is now known as Southern Michigan Bank & Trust. The bank had its beginnings in Coldwater, the Branch County seat. The bank was incorporated and opened for business in early 1872 in S.M. Steeley's bank rooms located in the Southern Michigan Hotel building next to the public square. It was felt that the bank needed its own building so land was cleared on the corner of Monroe and Chicago Street and construction began. Southern Michigan National Bank opened its doors at its new location in July 1872. During the Great Depression, many banks suffered. Southern Michigan National Bank, however, remained strong throughout that difficult period. There were no governmental bonds, either municipal, county or school that were ever defaulted on. In 2007, Southern merged with FNB Financial creating one of the largest commercial banking companies in Michigan. The following year, SMB&T combined the operations of both banks into a single charter, giving the bank a significant presence across the southern tier of Michigan.

Imagination FX was hired through Q1 Broadcasting to create an education video tutorial  for Southern Michigan Bank and Trust. This tutorial was to highlight the "Online and Mobile Banking" feature of the Southern Michigan Bank & Trust mobile app. We filmed, edited and created the motion graphics for this video project. This video tutorial  solved a problem for the client to quickly teach customers in using this feature.

PUTTING IT ALL TOGETHER

Throughout Southern Michigan Bank & Trust's solid history of community banking, service has always been the key to its success.  As SMB&T moves into the next millennium, one thing its customers can always count on is that they will enjoy Banking As It Should Be. 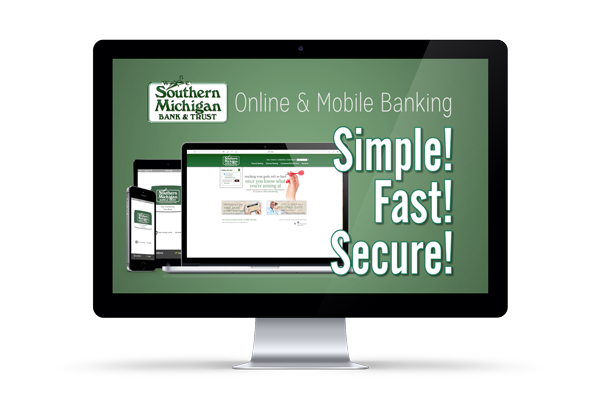